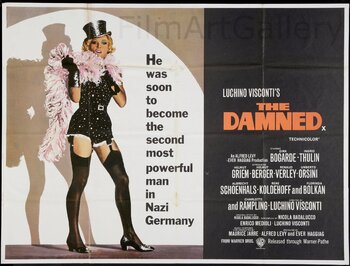 Yeah, a Big, Screwed-Up Family of Those Wacky Nazis!
"What is the meaning of all this control?"
— Friedrich Bruckmann
Advertisement:

The Damned is a 1969 film by Luchino Visconti. It's the first part of a Thematic Series with Death in Venice and Ludwig, collectively known Visconti's "German Trilogy".

The Damned was extremely controversial in its day, for both its sexual content and graphic violence. It remains a polarizing movie: some critics consider it a masterpiece, others think it's overblown and sensationalistic. Compare for instance Vincent Canby's glowing review

with Roger Ebert's scathing one

Not to be confused with a 1947 French film or the British punk band.