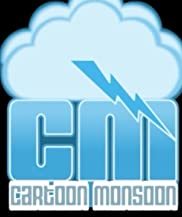 "The cartoons are coming!"
Advertisement:

Cartoon Monsoon is an Adobe Flash anthology webseries created by Warner Bros. Animation as the last of their many experiments with internet animation during the early 2000s. The series ran from March 4th, 2003 to September 20th, 2004.

Cartoon Monsoon was produced with a similar intent as other contemporary animated anthologies such as What A Cartoon! Show and Oh Yeah! Cartoons: that is, bypassing focus groups to simply show pilots directly to the target audience, and greenlighting the most popular ones, with the added benefit of Flash animation and internet distribution making it a much cheaper expense than those two examples.

Despite both seasons having announced "winners" — Season 1's Go Go Moba Boy! and Season 2's Edgar and the Voyagers — both shows were ultimately scrapped in production, though the former would see an extended pilot episode made.

The original website is long gone, but every short can be found on YouTube in this playlist

, albeit out of airing order.