Web Video / You Can Play This! 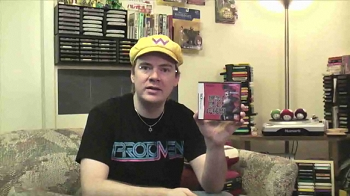 You Can Play This! was an Internet review show formerly on That Guy with the Glasses by Justin Carmical, a.k.a. JewWario. It focused on Japanese import games which, as the title of the show suggests, can be played by people who can't speak Japanese. Justin reviewed the games and gave the audience hints how to play successfully.

He also had a regular live stream every Friday on which he often had producers from TGWTG as guests as well as PatTheNESPunk.

Justin had left TGWTG around February 15, 2013. He continued to make content for YouTube and his own site. Around then he'd been doing a lot of cooking videos of mostly Asian cuisine (You Can Cook This), and had cited in one of his livestreams that both he and the staff of TGWTG agreed that the viewers of Channel Awesome were not the target audience for this. He since also produced shows on barcode scanning games (Scan This!) and import gaming news segments (The Pipeline). He had since then joined up with Retroware.TV meaning he was once again colleagues with Pushing Up Roses.

He was missed by family, friends, and fans alike.

In Spring 2018, allegations of sexual misconduct and sexual crimes arose from his time at the channel, revealing the cause of his split with Channel Awesome.

One of his last projects, Farewell, FamiKamen Rider, was completed by MarzGurl as a tribute.

This show contained the following tropes: