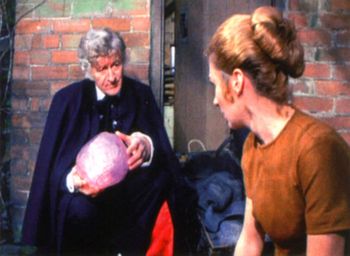 The first of many of the Third Doctor's Earth adventures.
"We deal with the odd... the unexplained. Anything on Earth... or beyond."
— The Brigadier sets out UNIT's mission statement
Advertisement:

The one where the Doctor takes a shower.

"Spearhead from Space" is one of the most important Doctor Who serials ever made. It was the first serial of Doctor Who to be broadcast in colour.note although colour TV sets were the minority at the time, so the vast majority viewers would still be watching the show in monochrome for some time It proved that recasting the Doctor into a different sort of person was a trick you could do more than once, meaning the series could run indefinitely. And it was the beginning of a long stretch that takes place almost exclusively on Earth. Due to a decision on the part of the previous production team to reformat the series,note It is a fan myth that budgetary restraints had anything to do with it the setting would be "contemporary Earth" for the foreseeable future, with the Doctor exiled to Earth by the Time Lords. With the Third Doctor being confined to life with UNIT, the show's atmosphere changed completely and started drawing much inspiration from that other famous Sydney Newman show: The Avengers.

The year is... whatever the hell people feel like it being. Blame John Nathan-Turner. Or Robert Holmes. Or maybe even Derrick Sherwin. Anyway...

A series of meteorites crashes onto Earth in a suspiciously uniform manner and without leaving an impact crater, which the British military decides to ignore (despite the suspicions of one very unnerved air traffic controller). One meteorite ends up being discovered by a hunter up in the country, who takes home the purple rock that to modern viewers sounds uncannily like someone's cell phone going off.

The TARDIS materialises (in colour, no less!) and a tall, white-haired man dressed in a Patrick Troughton costume steps out and collapses.

UNIT troops arrive and find the man, taking him off to hospital, where he spends some time in a coma. Brigadier Lethbridge-Stewart arrives and, after hearing that the man has two hearts and was found near a police box, concludes that it's probably the Doctor, who he last met while fighting a Cyberman invasion in London. When the Doctor wakes up— still with his previous personality— he's not at all happy at having been forcibly regenerated, but has to admit that his new face is rather dignified. The Brig is less content, being confused as to why this man looks nothing like Patrick Troughton and initially doubting that he's actually the Doctor, only to have his suspicions debunked once the odd man who looks like Jon Pertwee verbally recognizes him. One gratuitous shower scene later, the Doctor's stolen some oddly frilly clothes and a car (from the "Doctors only" car park) and is on his way to UNIT, where scientist Liz Shaw is trying to make sense of the mystery of the day. An employee of the local plastic factory is claiming that he's seen a walking mannequin. And there's a meteorite shower on.

The new Doctor is still suffering from amnesia (caused by both his execution and the Time Lords having removed large chunks of his memory pertaining to TARDIS operation) and tries to get used to his new personality while he investigates the strange meteorite shower. He discovers that the meteorites are in fact hollow globes containing the Nestene Consciousness, another disembodied alien intelligence (see "The Abominable Snowmen" and "The Web of Fear"), which uses plastics to achieve its ends as opposed to Yeti balls (no, not those kinds). In one classic scene, shop dummies come to life, smashing through the shop windows (off-screen) and firing guns concealed in their hands, spreading panic— but the Nestene Consciousness's real plan is to create plastic replicas of world leaders and take over the Earth.

The Doctor and Liz manage to repel the Consciousness back into space thanks to the power of a tiny satellite dish (after the Doctor spends some time mugging for the camera while being strangled by the Consciousness) and the Doctor agrees to sign on as UNIT's "Scientific Advisor" for the duration of his exile, signing the paperwork as Dr. John Smith. In exchange, UNIT will give him technical facilities to try and repair the TARDIS (which has been deactivated by the Time Lords), and the use of a vintage car just like the one he had earlier appropriated from the hospital.