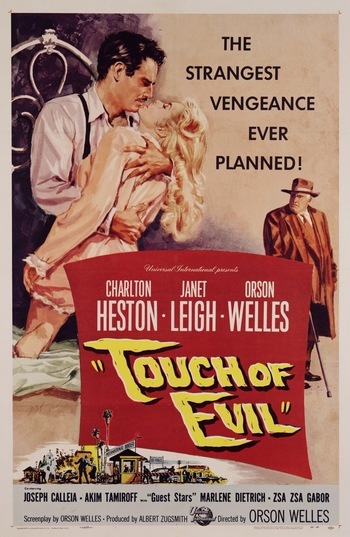 "He was some kind of man. What does it matter what you say about people?"
— Tana
Advertisement:

Touch of Evil (1958) is one of the last and one of the greatest examples of Film Noir, written, directed and co-starring Orson Welles.

The film begins with an exploding car killing a powerful businessman, witnessed by Vargas and Susie on the Mexican border. Claiming joint jurisdiction (as the bomb may have been placed in Mexico), he works his way into the investigation headed by Quinlan. Quinlan quickly sets his beady eyes on a lowly Mexican employee that had a grudge with that businessman (the employee wanted to marry the businessman's white daughter). When Vargas notices that some of the evidence found by Quinlan's loyal partner Menzies was clearly planted (but can't prove it), Vargas starts questioning Quinlan's case history. But while this is all happening, Susie Vargas is left all alone at a creepy hotel where some gang members that Vargas is after are holed up as well and Quinlan starts making a few calls to the gang's boss about what to do with that lonely newlywed.

The film is an unlikely collaboration between producer Albert Zugsmith (former media lawyer and producer of B-movies and Rock Hudson melodramas) and Orson Welles. There are two versions on how the film got made. In version one, Charlton Heston was cast in the film but on learning that Welles was also cast, he insisted that he direct the film. The other story is that Zugsmith offered to let Welles helm a film based on one of the properties he had rights to. Welles chose the less promising one (the pulp novel Badge of Evil), reasoning that the weak material would allow him more creative freedom, less risk and that a success would make it easier to make his long-term projects. It didn't work out as planned though. The film suffered from Executive Meddling, was re-edited and some of the scenes were shot by other directors. It was then dumped poorly and failed at the box-office. It would be Welles' final Hollywood film. There are three versions of the film. The original theatrical cut, an earlier preview version with more Welles footage discovered in the vaults from 1976. In 1998, producer Rick Schmidlin, worked with Oscar-winning editor Walter Murch and critic Jonathan Rosenbaum to create a Reconstruction based on a memo written by Welles. Recent DVD-BR releases features all three versions but since the 90s, the Reconstruction is regarded as the film closest to Welles' vision.