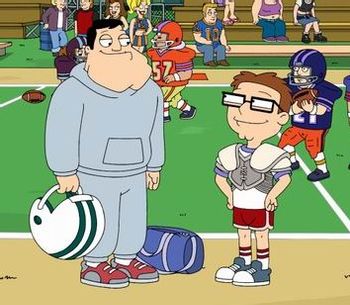 Tends to be a High School trope. When a father was a jock in high school (usually marks his Glory Days) while his son pursues less athletic endeavors, usually to the father's disappointment. In quite a few cases the father's grief stems from him being a Jaded Washout who had hoped to live vicariously through his son, but the son's interests effectively means he can't.

Related to a "Gender-Normative Parent" Plot, but is part of the underlying characterization as opposed to a single episode plot. Subtrope to Like Father, Unlike Son. Could be considered an inter-generational version of Sensitive Guy and Manly Man, as well as a loose gender inversion to Feminine Mother, Tomboyish Daughter.