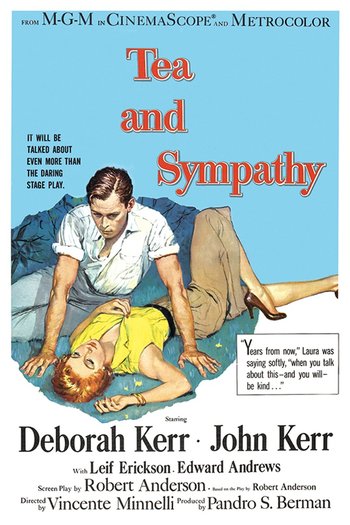 "Years from now when you talk about this—and you will—be kind."
— Laura Reynolds
Advertisement:

Tea and Sympathy is a 1956 drama film directed by Vincente Minnelli, based on the stage play by Robert Anderson (who adapted the screenplay himself).

It tells the story of Tom Lee, a senior at a boys' prep school. Different from the other boys—in that he prefers music and reading as opposed to sports and roughhousing—he's a frequent target for bullies. They suspect he might be gay, and he faces pressure from his father to be more manly. He gains a kindred spirit in Laura Reynolds, the wife of his coach. She too is lonely at the school and is drawn to be Tom's friend, reminded of her deceased first husband.

The original play was one of the first to tackle the topic of sexual orientation, and the prejudice that results. John Kerr played Tom, with Deborah Kerr (no relation) as Laura and Leif Erickson as Laura's husband Bill. All three reprised their roles for the film adaptation. Former Child Star Darryl Hickman has a small role as Tom's roommate Al.