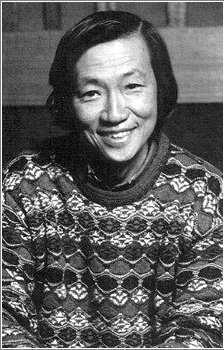 You damn description...WHAT IS THE COLOUR OF YOUR LETTERS?!

Tomokazu "Kaneto" Shiozawa (January 28, 1954 — May 10, 2000), real name Toshikazu Shiozawa, was once the go-to guy for soft-spoken Bishōnen roles. If you notice any character that was voiced by him, chances are they might have a sudden change in composure at times. Yep, he can also flip his voice into crazy mode on a whim.

Sadly, in 2000 his career was cut short when he fell down the stairs in his home and died hours later of a severe concussion. Hidekatsu Shibata was one of the attendees at his funeral.

Reportedly, Shiozawa was a good friend of Daisuke Ishiwatari, the creator of Guilty Gear. Out of respect for his passing, Ishiwatari decided to keep his character of Zato in later games, but as the parasite Eddie which had now taken control of Zato's body, although Zato himself has been brought back and still with Eddie's VA Takehito Koyasu (who would coincidentally also take over from Shiozawa as Shin and Rei).

Hikaru Midorikawa has called Shiozawa his hero. His successor appears to be Takumi Yamazaki, who can accurately emulate his voice and has replaced him in several roles, as noted in his Japanese Wikipedia article.