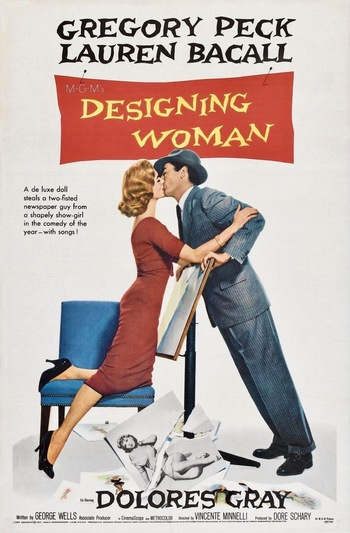 New York sportswriter Mike Hagen (Peck) and fashion designer Mirella Brown (Bacall) fall in love and quickly get married after a whirlwind romance in California. But even with all that chemistry, they find out that their lives are very different. Even so, they try to work things out.

Trouble arises when Mirella finds a ripped picture of Mike’s ex-girlfriend, Lori Shannon (Dolores Gray), in his apartment. Mirella doesn’t think much of it until she starts designing costumes for a Lori Shannon show, and she realizes that Lori's legs match the photo in Mike’s apartment.

Meanwhile, Mike is writing riveting sports journalism, but it’s gotten him in trouble with Martin Dayler, a mobster who fixes boxing matches. He’s warned several times by his Mooks that if he doesn’t stop his boxing exposés, they’ll knock his teeth out.

After writing one article too many, Mike has to hide out from the mob and pretend he’s following baseball games around the country. This, however, doesn’t help the piles upon piles of misunderstandings with Mirella as her suspicions of his former relationship with Lori grows.

Academy Award winner for George Wells’ original screenplay. Not to be confused with the 1980s sitcom Designing Women.