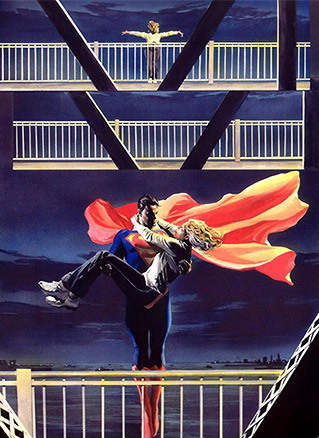 "But on this night, no one was forgotten...least of all by those who had promised to save others from despair."
"The living are not done with you yet."
— T'Challa/Black Panther, Captain America: Civil War
Advertisement:

A character is about to commit suicide and is stopped by somebody else Just in Time, sometimes thanks to the suicide note. Especially with bridges and building ledges. You can expect the Interrupter to be Talking Down the Suicidal, but not always.

Regularly subverted: Any character standing on a ledge is mistaken for a jumper. Another subversion, rather more cruel, is when somebody else shows up Just in Time... but fails to prevent the suicide, and has to witness it instead.

Upon realizing that pizza no longer exists, Grif tries to kill himself with a grenade, but Doc intervenes.

Example of:
Driven to Suicide

Upon realizing that pizza no longer exists, Grif tries to kill himself with a grenade, but Doc intervenes.