Animation / Once Upon a Dog 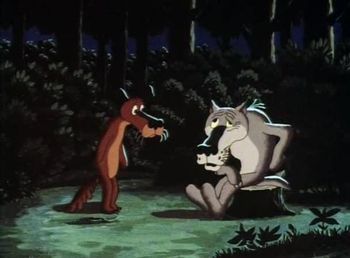 A Soviet animated short (1982) directed by Eduard Nazarov based on a Ukrainian folk tale.

A farmer's guard dog gets too old to do his job properly and gets in the way of everyday chores, so the farmer gives him the boot. Dog runs to the woods and meets the Wolf there. They become friends and the wolf decides to help his former adversary to get his job back...

Can be watched on YouTube with English subtitles here