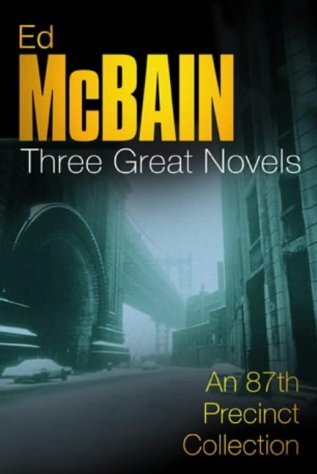 The 87th Precinct series is a Long-Running Book Series in the Police Procedural genre, written by Ed McBain (the crime-fiction writing pseudonym of Evan Hunter). It features a revolving cast of police officers from the eponymous precinct, located in an unnamed city that isn't exactly New York.
Advertisement:

The series began in 1956 and continued until 2005 with the novels progressing from short pocket novels of roughly 200 pages (often released two or three times a year) to the longer style of novel common today (released once every year or two). The series was atypical in a number of ways from most other mystery/police drama series in that cases were often solved through routine police work, mistakes made by the criminals, or the criminals were not apprehended at all. Also atypical was that the detectives were usually less invested in the case - they went home at night, let other detectives handle part of the foot work, and treated the cases as a matter of routine. Detectives who served as the primary protagonist in a previous novel in the series would often be a secondary character in the next and there was no set pattern as to which detectives were partners or not. Given the time-length of the series it also had its own version of Comic-Book Time where the officers stayed roughly the same age throughout the series but still referenced previous cases and major events.