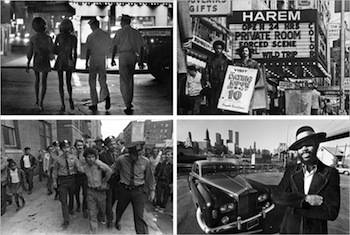 And the worst thing is, once you've gotten a taste of it, you can't stand to live anywhere else. It's actually not uncommon for people these days to feel oddly nostalgic for the bad old days when this was true, since, as many commentators note, New York City had a relatively low cost of living at the time compared to nowadays.

The Big Rotten Apple trope can come into play in any story set during the city's existence (you'll also sometimes see this trope in stories set in late 19th Century/Gilded Age New York, when high crime, overcrowding and income inequality led to similar stories and situations), but this has mostly become a Dead Horse Trope unless one is doing a period piece, as this was mostly Truth in Television from the mid-to-late 1960s to the mid-to-late 1980s.

New York City (as well as many other cities throughout the United States and Europe) suffered major urban decay in the start of that period. Crime was rising rapidly, racial antagonism was high, and various industries were starting their declines. In America, the completion of the Interstate Highway system and massive advancements in automobiles meant that commuting to the city while living elsewhere was easier than ever. This led to major "white flight" to and massive growth of suburban areas, entrenching the suburbs' reputation of being safer, cleaner, and more... homogeneous than larger cities.

On the flip side, this massive and relatively sudden outflux of people led to a rapidly deteriorating tax base (New York City was BARELY brought back from the brink of bankruptcy in 1975), causing government corruption, neglect, and lack of city maintenance. The 1970s and the early 80s were without a doubt the peak of this decay, which is why this trope peaked in that period. By the mid-1980s to early-90s the cities had started to slowly recover, white flight slowed somewhat, and unemployment had fallen, but the cities were still scarred from the problems, such as crime, so this trope was still decently prevalent, but not anywhere near as much as previously.

However, by the 1990s, cities in the United States (and European ones) had mostly recovered, with populations stabilizing or increasing again, crime and pollution plummeting, poverty falling, and blight mostly recovering. At the same time, many of the problems that cities had (poverty, crime, corruption, racial division) had slowly started to creep in the suburbs as well. Some cities obviously recovered more than others: many smaller cities in the Midwest only slightly recovered and are nowhere close to their peaks in the early and mid-20th century, while New York City has arguably recovered a bit too well, such that many working-class people have left for cheaper places to live as gentrification drove land values (and with them rents and property taxes) ever higher. At the end of the 20th century and the beginning of the 21st, it was the cities of the West Coast that got the reputation as dysfunctional: Los Angeles with gang violence and the Rodney King riots, San Francisco with its housing crisis - where house prices are so expensive that even if you're already rich, you'll find househunting to be almost impossible - and massive homelessness problem, and Portland with its violent anarchist protests and homelessness crisis. Despite this, many people who grew up in the 1960s and 1970s still believe New York City is like this because of what pop culture told them during their formative years.