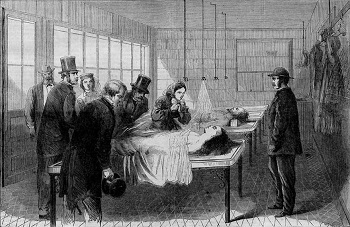 Few things inspire more fear than losing a loved one. In this case, that fear comes true via characters being summoned by police to a morgue to identify a body they believe to be a family member of theirs. For the family of the victim, this can be partly expected if, say the victim had been missing for some time, but at others, it can come completely out of left field. Now they can do nothing save arrange a funeral.

In cases of disaster or other large-scale catastrophes, this may become an entire process, as they not only have to identify the body, they may first have to find it, going down rows of them, or having one after the other brought out, dragging the anxiety and tension out with each new dead face.

While this sort of scene is usually used for dramatic purposes, showing the relative bawling their eyes out over the corpse of their loved one or on someone else's chest, it can also serve to set up clues that may serve a role later in the plot, such as the relative sharing heretofore unknown information about the dead person's life or something unusual about the corpse itself.

Compare Death Notification and Zipping Up the Bodybag. If a body is damaged beyond identification, usually the Identification by Dental Records occurs instead.

As this is a Death Trope, beware of spoilers.