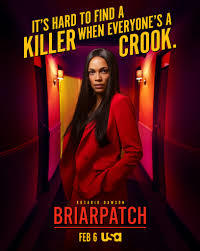 "Felicity called this 'Breadknife Weather.' When the temperature gets up in the triple digits like this, folks don't even bother reaching for the sharp stuff before they start stabbing each other."
— A.D. Singe
Advertisement:

Briarpatch is a miniseries airing on USA Network, created by Sam Esmail and starring Rosario Dawson.

When her sister is killed by a car bombing, Senate investigator Allegra "Pick" Dill returns to her hometown to investigate and find out who did it.