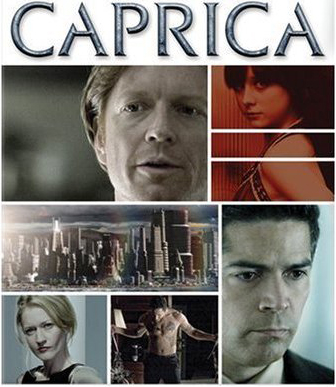 Daniel Graystone: Listen to me, okay? We'll talk about this later.
Zoe Graystone's Holographic Avatar: When are you gonna realize that later is too late? When did you ever listen? Ever want to listen? You and Mom, you knew it all. Your arrogance was killing your daughter. And that's how you lost her. Not to some bomb.

Joseph: I want you to know who you are. We come from a long, proud line of Tauron peasants who knew how to work the land and still stand proud. You're named after your grandfather. Did I ever tell you that? ...William. He was killed during the Tauron uprising. Our last name isn't Adams. I changed it after I arrived here on Caprica. Our family name is Adama. ADAMA. And it's a good, honorable Tauron name.
Advertisement:

Caprica is a spin-off set in the same universe as the Battlestar Galactica re-imagining. It is a prequel set 58 years before the Destruction of the 12 Colonies, mainly on the titular planet Caprica. The pilot episode was released on DVD in April 2009, and the first season premiered in January 2010.

Though set in the same universe, Caprica has a much different look and feel from its predecessor. Set in an urban environment rather than in space, Caprica focuses on political, corporate, and familial intrigue, and tells the tale of a decadent society that doesn't realize that it's about to run headlong over a cliff. The story of Caprica centers around the families of Daniel Graystone, a computer engineer and entrepreneur and creator of the Cylon robots, and Joseph Adama, a lawyer and father to Galactica's William Adama. Recurring themes in the show explore artificial intelligence, robotics, religion and ethnicity. Caprica tells the backstory of the re-imagined series, and the story behind the creation of the Cylons.

The show was canceled during its first and only season, concluding in Canada in late November 2010 and in the US early January 2011.