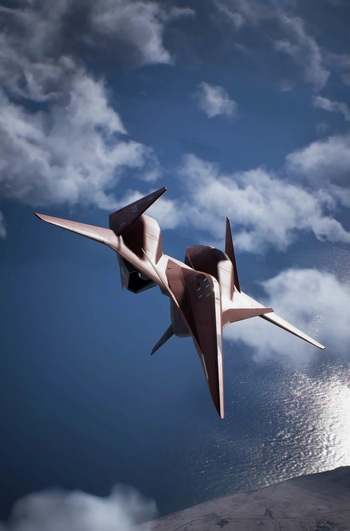 The ADF-01 Falken: an ace aircraft for an ace pilot.
"If Kim Basinger was a plane, this is what she'd be."
— Tom Clancy, describing the F-22 Raptor
Advertisement:

The aerial equivalent of the Cool Car, Cool Boat, and the flying, usually metallic (but increasingly composite) incarnation of the Rule of Cool. Allowing you to rule the skies with pizazz, the Cool Plane will not break down, rust, or ever go out of style (unless the plot demands it). This is a plane that doesn't serve peanuts to its customers, it serves a Vesper martini, a buffalo steak burger, and a side order of whoopass given by a very pleasant stewardess. Please keep your hands inside the vehicle at all times while reading this play and take note of the exits. You may need to parachute out.

Cool Planes are probably piloted by a Danger Deadpan Ace Pilot. They will frequently include stealth technology, which in reality does not make a plane invisible to radar, but reduces the detection to such that enemy reaction times will be reduced so much they cannot really do anything bar getting the hoses out.

Oh, also: Helicopters are included in this category. Airships, however, get their own page. For the Cool Plane IN SPACE!, see Space Fighter and Space Plane.

Remember that just giving the plane's name, saying "<name> is a Cool Plane" or giving a link to another site isn't enough. You need to specifically say in the example how it's a Cool Plane so that the average reader who isn't an expert on planes can understand it.

The only way to get inside the villain's hideout is with this sleek, convertible plane.

The only way to get inside the villain's hideout is with this sleek, convertible plane.