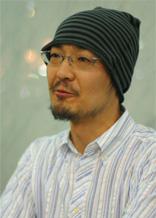 Mohiro Kitoh (born August 8, 1966) is a mangaka best known for Shadow Star and Bokurano, both of which have been adapted into anime series. Before those, he also wrote the two-volume manga Wings of Vendemiaire as well as a number of short stories.

He typically writes in the science-fiction genre, and his work frequently sits on the far end of the cynical side of the scale (though there are exceptions). It frequently involves very disturbing material and abrupt changes in mood. Common themes include the cruelty of humans and the innocence (or loss of, or indeed lack thereof) of children. He is also really fond of mountain bikes and airplanes; in fact, one of his more recent series, Noririn, is about bikes, while another, Hayabusa-chan mo Tondemasu, is about aviation.

When you break apart the kanji for his name, it means "ogre headed teacher." And considering the stuff that he writes...

He has also served as an illustrator, doing cover art for some of the novels of Natsumi Masataki (a science-fiction writer whose work frequently focuses of aviation and the military).

Tropes present in his works: