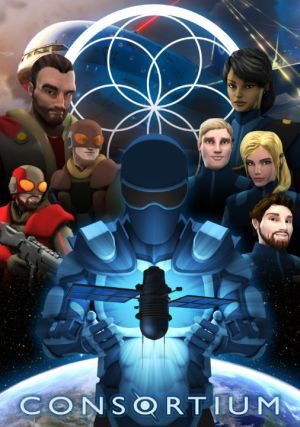 Otherwise known as the "iDGi-1 Trilogy", Consortium is a first person meta-RPG released in January 2014 by Interdimensional Games, and through going the route of Omikron: The Nomad Soul, Analogue: A Hate Story, Virtual-ON and Teleroboxer, the player (As in, you, the very person sitting at your computer), is a character in the story itself.
Advertisement:

The idea is that the developer of this game has created a satellite uplink allowing the player to travel through a digital rift in reality, and enter the body of international peacekeeping consortium officer Bishop Six in order to help the crew investigate a mysterious murder that occurred on board the C-3800-D "ZENLIL" Consortium Command vessel on December 21st, 2042. The player has a choice between using lethal force or diplomacy in figuring out this mystery, with the relationships forged with the crew altering the outcome of the story.

The story of the game will continue with a sequel, Consortium: The Tower. It was successfully crowdfunded

in 2016 and is projected for release in early 2018. After the events of the first game, Bishop 6 launches from Zenlil onto the Churchill Tower in London which has been currently overun with terrorists. Unlike the previous game, which featured a total of two weapons (and not a lot of shooting aside from VR), The Tower is a decidedly more action focused affair.