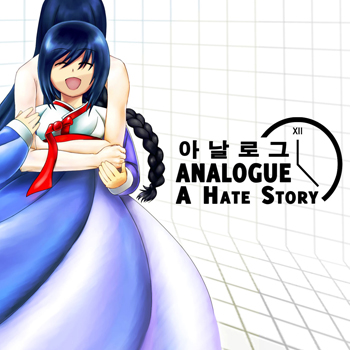 A Ren'Py-based Visual Novel by Christine Love, creator of Digital: A Love Story and don't take it personally babe, it just ain't your story.

In 2390, a generation ship called the Mugunghwanote the name of the national flower of South Korea departed from Earth with the aim of establishing the first interstellar colony, only to disappear having never reached its destination. Thousands of years later, the derelict ship has been located, adrift in space, and your goal is to access the ship's computer logs and discover exactly what happened.

With the aid of *Hyun-ae, an AI aboard the Mugunghwa (the * is silent and merely an indicator that she is an AI), you dig into the layers of a society that had degenerated into an antiquated patriarchy, and the plight of a young girl called the "Pale Bride" who seems to be at the centre of events. Things get even more complicated when the ship's security AI, *Mute, enters the fray and brings a whole new perspective on the events that unfolded.

The player lacks the ability to directly interact with the logs of the Mugunghwa (due to the system being unable to parse their text input) and must rely on their AI partner for exposition and searching functions. By presenting important logs to your partner, you can convey the information you wish to find out more about. In the grand tradition of Visual Novels you can also build up a relationship with your AI partner, which leads to one of the five Multiple Endings.

It's currently available on its official site and Steam for $10. On June 29th, 2012, it got a free update that made the Steam version compatible with Steam Cloud (thus allowing achievements) and added two new costumes for *Hyun-ae. In September 26th, 2012, a Korean translation of the game was made available. Love has also released a sequel called Hate Plus on August 19th, 2013, after some Development Hell and unpredicted, unfortunate events like her apartment burning down

. At first it was meant to be a paid Downloadable Content package for Analogue, but it ultimately became a full-fledged sequel of its own, with the story involving the investigator uncovering hidden files that detail what caused the societal degeneration of the ship.

Character page is in the works.

For the sequel, see Hate Plus.