Video Game / Among the Sleep 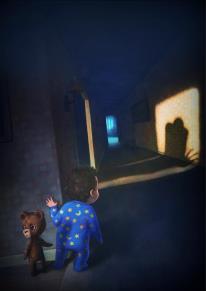 "A child should not have to go through this..."
Advertisement:

Among the Sleep is a crowd-funded Psychological Horror game by Norwegian developer Krillbrite Studio. Distinct among games in that genre, it is played from the point of view of a toddler, who wakes up in the middle of the night after something disturbing happens, and they go seeking their mother with the help of their faithful teddy bear. Unfortunately, things are not as they seem and the situation becomes increasingly surreal and dangerous as it unfolds...

The game was first released for the PC in 2014, with a port for the PS4 following in 2015 and the Xbox One in 2016. There have been two DLC released. The first was released a few months after the game's release and adds an extra chapter taking place before the events of the main game. The second, packaged the "Enhanced Edition", was released in late 2017 and contains behind-the-scenes, extras, and other tidbits related to the game's production. The game will have its Updated Re-release on the Nintendo Switch in 2019.

Warning: All trope names will be unspoiled, so read at your own risk!

Tropes used in Among the Sleep:

The toddler's mother is revealed to be a divorced alcoholic.

Example of:
The Alcoholic

The toddler's mother is revealed to be a divorced alcoholic.