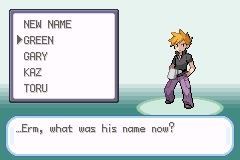 "Gramps, no one ever laughs at that joke! Would you give it a break?"
Advertisement:

If I ask you, "what color is the dragon in my garage?" and your reply becomes true no matter what color you give, you just answered Schrödinger's Question.

This is a role-playing trope where you determine reality by answering a question whose answer you don't know. It reverses causality: instead of your reply being based on the correct answer, the correct answer is based on your reply. It's a way of letting players in on building the universe and, as such, is a subtle form of Breaking the Fourth Wall.

A mild version of this trope appears when an RPG asks you to name a party recruit. You may never have met her before but once you give her name, even her family refers to her so. Note that there are occasions where naming a character doesn't fit this trope: nicknaming a freshly caught Pokémon has a good in-game explanation, but naming your rival does not.

Occasionally, as an example of The Computer Is a Lying Bastard, this will be inverted, where every answer you choose is wrong.

More egregious examples can be found below.

Related to Schrödinger's Gun, where the game or Game Master changes reality but the player is not complicit.