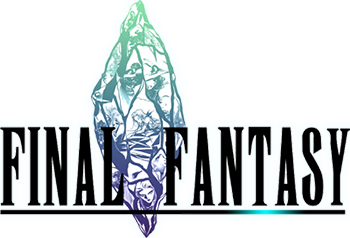 Thirty years and counting, the finale nowhere in sight.
"I don't think I have what it takes to make a good action game. I think I'm better at telling a story."
— Hironobu Sakaguchi, before the creation of Final Fantasy
Advertisement:

For the first game in the series, please see Final Fantasy.

The pride and joy of Square Enix (formerly Squaresoft), Final Fantasy is a hand-rubbingly popular fantasy JRPG franchise, currently on its fifteenth iteration alongside multiple sequels, spinoffs, remakes and films.

The series is highly regarded for its outstanding production values and gameplay, and for being a pioneer in the Eastern RPG (or "JRPG") genre. Many of the conventions that didn't originate in Dragon Quest originated with the Final Fantasy series, which in turn was influenced by Ultima and other Western computer role playing games. Even to this day, each new Final Fantasy game attempts to evolve the genre with new gameplay innovations or approaches, and although this can be divisive to the fanbase, credit is generally given to their attempts to at least try something different in the heavily-stagnant and conservative JRPG genre.

The series was fairly-obscure for a long time in the west, before exploding in popularity with the release of Final Fantasy VII, which exposed most people to the JRPG genre for the first time. It is still widely regarded as one of the best RPGs (eastern or otherwise) of all time. Since then, Final Fantasy is widely-considered the gold standard of JRPGs in the west, and is held in such regard that the English localizations are now developed concurrently with the original production.

This series was also one of the first Japanese games made by someone other than Namco or Nintendo to reach US shores and capitalize on that market. Later Japanese developers would take notice and break onto the US scene; one equally-popular series which took advantage of this trend was Dragon Quest, Enix's Flagship Franchise (Shin Megami Tensei, Atlus's own flagship franchise, would also make the jump to the west for the same reason). Final Fantasy and Dragon Quest were direct competitors as far back as the the NES days; following the Square-Enix merger, SMT and Final Fantasy are currently competing in both countries. Meanwhile, Dragon Quest has quietly found a niche market outside of Japan, though it remains king in its home country.

The Final Fantasy series consists of:

open/close all folders
Main Series
Sequels and Spin-Offs
Games that are directly connected to the Main Series, either as sequels or Spinoffs.
Sub-Series
Games that are not directly connected to the settings or characters of the Main Series, but are still considered Final Fantasy titles.
Dolled-Up Installments
The first three games of the SaGa series were re-titled and released in America under the Final Fantasy Legend moniker:

The Dungeon games are part of the franchise-spanning Mysterious Dungeon series, which are generally simplified roguelikes with prettier graphics.

The series has various subpages, including one on game breakers and accidentally humorous overwrought moments.

Tropes common in the series: