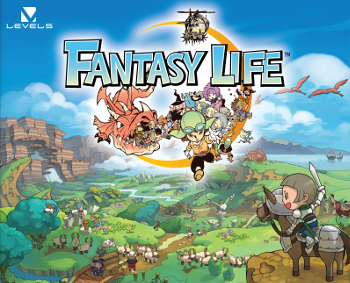 Just another day in Reveria.
Advertisement:

An expansive 2014 3DS Eastern RPG made by Level5, better known for creating Professor Layton, with Nobuo Uematsu contributing to the music. It mixes together elements of the Slice of Life and Role-Playing Game genres in a Wide-Open Sandbox that opens little by little via progression of a storyline.

The day you start your new job, you befriend a talking butterfly who seems very curious about your world, where falling meteorites known as Doom Stones are a regular occurrence. After one of them strikes your roof, you end up investigating and finding out that the end is near.

The only solution to this is for the world's entire population to band together. Unfortunately, the three kingdoms are not on best terms with each other and The Powers That Be seem to have decided that you are the one that will resolve the issue.

You may be looking for Mabinogi: Fantasy Life, in which case you're better off going here.