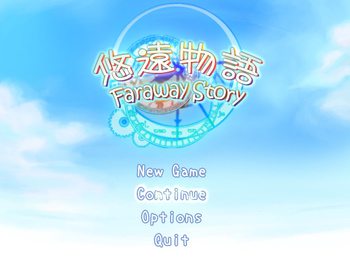 Faraway Story is an action RPG made by Fantasy Factory

in Wolf RPG Editor and translated by vgperson

.The story follows pharmacist-in-training Pia as she departs from her home town, determined to cure a disease striking the nearby town of Port Fina. Upon arrival, she can't help but notice a giant landmass floating in the sky above the town: the Faraway Continent. To her surprise, the townspeople think little of the continent, though many rumors exist about what might be there. And what begins with Pia running her little item shop on the hill ends up as a story spanning many faraway places and times...
Advertisement:

Between story scenes, you fight through both randomized and predetermined dungeons using a variety of weapons and magic. You can also gather and create many items via alchemy, improving your skills to get better items for yourself, or to sell at your own shop.

Note: The game is complete in a sense, but has an extensive "post-game" planned.One entire scenario, Part 1, is fully playable (and approximately 25 hours long).However, a second (of theoretically comparable length) is still in the works, and does promise a true conclusion to the story.Version 0.75.25 contains five chapters of the Part 2 scenario. It could be a long time before Part 2 is fully complete.