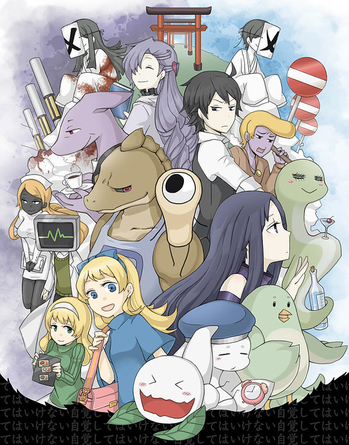 Farethere City (Japanese: Minoniyoku City) is a freeware RPG Maker 2000 game made by Segawa. It is about a one-eyed creature named Pigula who moves into an idyllic town called Farethere City to fulfill his dream of opening a general store. The city's acting mayor Hopopo is quick to offer him a property costing only 5000 yen to renovate into a store, and the city's inhabitants are happy to welcome him.

This is the perfect opportunity for Pigula to make his dream come true and find new friends and a home in the process... if he can ignore these ominous dreams he's been having or the items in his room that he can't recall having put there. Not to mention the fact that the property is supposedly haunted.

The original Japanese game can be downloaded here.

Also see End Roll and Walking on a Star Unknown, another RPG Maker game from the same creator.