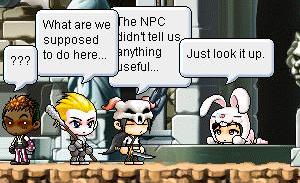 Nice of her to tell us that...
"They make it so you can't defeat Zurg unless you buy this book! It's extortion, that's what it is!"
— Rex, Toy Story 2
Advertisement:

Games often have puzzles to solve and hidden secrets to uncover. A game may try to provide hints to the player in order to lead them in the right direction. Other times, a game may present a scenario to a player where the correct set of actions is not obvious and no information is given to the player on how to proceed. Short of spending countless hours trying every remote possibility until something happens, the only way the player may figure out how to proceed is to consult an external source such as a Strategy Guide or an online Walkthrough. Guide Dang It!

This is particularly necessary when dealing with random maze sections, determining Relationship Values, earning the Golden Ending, or trying to achieve 100% Completion (to avoid missing Permanently Missable Content). The Collection Sidequest may be subject to this if the game ranks on the harder end of the Sliding Scale of Collectible Tracking.

A Guide Dang It can crop up in a game for many reasons. The developers may not have intended for the task to be obscure because they assumed the players would make a connection that seemed intuitive in playtesting. They also might have simply forgotten to include instructions or hints in game that could nudge players in the right direction or may not have wanted to overload players with information that wasn't necessary to know for the main parts of the game. At other times, the inclusion of a Guide Dang It is very much an intentional part of the gameplay experience. It may add Replay Value to a game where players discover a new secret they didn't catch previously. It can also give a game an air of mystery that gets fans theorizing and figuring out that the empty room actually isn't so empty after all.

Many of these examples may have been placed as interesting finds for players that accidentally get into obscure situations or curiously muck around with the game, especially in older sandbox titles where groping around in the proverbial dark was an intentional part of the experience. There were also some more sinister versions where the developers wanted you to spend money by calling their hotline or buying their hintbook or Magazine. Now that GameFAQs, walkthroughs, forums, and even dedicated wikis are ubiquitous and easily accessible, this practice has all but died out.

Contrast with Player Nudge when the developers are aware of Guide Dang it and attempt to subvert it. Often overlaps with Metagame, which has new rules that are not written in the official books, making the game very annoying for new players.

Note: A "Guide Dang It" is any instance in a video game where the game fails to provide sufficient information, hints or otherwise, to a player that could aid them in solving a task or discovering a hidden in-game element. If the game does provide a hint that's reasonable enough to locate and decode, it doesn't qualify. Before listing this on a page, consider if it may fall under one of these other tropes instead, though there could also be potential overlap.