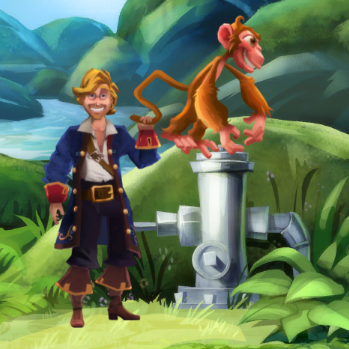 It's a monkey wrench, get it?
"'Ninja star + Chess + Watermelon + Sand = Swimsuit. I need to bring a banana with me 'cause... it makes me immortal if I get shot. My teddy bear can find pieces of a screwdriver, but it is useless without fish.' I know that this game took a lot of work, but you can't make people think they'll need to take the cat and cover it with gasoline if they want to proceed..."
— 0EndlessNameless0, Pursuit user review
Advertisement:

Sometimes, it's easy to see how to Solve the Soup Cans — give the chicken noodle soup to the guard with the cold, trade the tomato for the red orb, and pour the cream of mushroom into the chalice with Mario engraved on the side. The puzzles may be challenging and have nothing to do with what you're doing, but given enough thought, the solution at least is logical.

And sometimes, standard logic just won't get you to the right answer, no matter how hard you try. To find the solution, you have to look at the problem in a way that may seem entirely unintuitive on its face. This is not a Guide Dang It!; all the information you need to complete your objective is right there in the source. Some people will be able to make the intuitive leap almost immediately, others will struggle for hours and still never spot the bend in logic that leads to the answer.

If a frustrated player eventually does reach for the strategy guide, there will be two common reactions on discovering the answer: If the puzzle is well written, the answer will make complete, brilliant sense in hindsight, and the player will respect the puzzle designer, perhaps curse themselves for giving in to the strategy guide, or for needing it in the first place.

If it is poorly written or implemented, you still may not think anyone could possibly solve it on their own. You may also find yourself cursing the developer for expecting you to make overly arcane connections, notice absurdly minute details, or for throwing in intentional or unintentional Red Herrings; but even a badly executed but successful moon logic puzzle makes sense after you read the answer. The pieces of the solution were in fact provided, and the solutions make logical sense in hindsight, just in strange or hard to notice ways. Even a highly skilled puzzle-solver will occasionally get stuck on one of these. When this is bad enough that hundreds of players will get stuck on this puzzle, it's That One Puzzle.

Failed attempts at creating a moon logic puzzle, on the other hand, will have the player screaming at the ceiling in rage upon reading the solution, and are generally unsolvable except by accident. The worst offenders cross the threshold from "convoluted but comprehensible logic" into Non Sequitur or even pure Insane Troll Logic — for example, you should just know which three rocks should be arranged on the three pedestals and in what order.note obviously by size order to form the first three digits of Pi because there are more circles than squares in the pattern on the wall. Other times, the clues that would have led to the solution seem so out of left field that it leaves the player wondering "how was I supposed to know that?" Such "out of left field" examples might entail figuring out the third meaning of a Double Entendre someone you talked to 20 hours ago made, listening to the unlisted audio track included on the bonus disc that didn't come with the rental, knowing some obscure pun in a language other than English that got Lost in Translation, or not being familiar with a common custom of the writer's culture. note  for example: "Click the blue button, followed by the purple button." The Russian language recognizes dark blue (siniy) as a separate basic color from light blue (goluboy). The range covered by siniy includes a chunk of what an English speaker would call purple, and is "obviously" distinct from goluboy. Purple, on the other hand, is fioletoviy, which more closely matches "violet". Thus, with a simple slip of translation or colorization, a Russian player may be utterly baffled by having two slightly different siniy buttons, no goluboy or fioletoviy buttons, and no hint as to what the problem is.

This can go full circle into its polar opposite, Unexpectedly Realistic Gameplay, where players get so used to game logic that Real Life logic is now what's alien.

If a character In-Universe has to solve one of these without player interaction, they may best display the skills necessary to tackle these kinds of problems if they're the Cloudcuckoolander; anyone else will have to rely on Bat Deduction. And in either case, the solution will turn out to be an Unexpectedly Obscure Answer.

Moon logic and soup can puzzles tend to still be in favor more amongst hardcore traditionalists than casual adventure gamers who prefer storytelling and puzzles that actuallyu make sense within the context of the story. There seems to be a niche group who enjoys whimsical brainteasers exercises in quirky thinking more than serious attempts at a story. For them, it is more about the pride of figuring out on their own just how to get the Babel Fish, this example being perhaps the Trope Maker.

Far, far too many moon logic puzzles are based on Puns.

Anime & Manga
Game Shows
Literature
Live-Action TV
Roleplay
Tabletop Games
Theatre
Visual Novels
Web Comics
Web Original
Web Videos
Western Animation
Real Life
To properly end this page, you must shave the bowling pin with the broken paperweight to make a key, and use that to return to... you know what? Forget it.