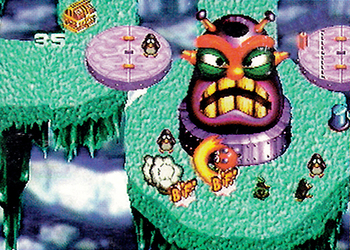 We've got aliens, but not supremely funky homeboy aliens.
...When you get the bat, you gotta kill all the penguins, but they don't die if you hit them. Instead, there's a bunch of power orbs that scatter all over. You gotta get all the power orbs to power up your bat so you can kill the penguins, but you only kill the penguins wearing hats, because the ones that don't wear hats fight the ones that do wear hats. If the mutant penguins on the Doom Scale outweigh the regular penguins, the Doom Scale starts screaming and going apeshit!
— Angry Video Game Nerd, Atari Jaguar (Part 2)

Developed by Sunrise Games and released for the Atari Jaguar in 1995, Attack of the Mutant Penguins is one of the strangest video games on any system. (There was also a PC version simply titled Mutant Penguins.)

The game's premise is that evil green aliens from the distant galaxy of "Bleurgggh" have decide to invade the Earth having disguised themselves as penguins, since watching wildlife documentaries left them with the impression that penguins were obviously the dominant species on Earth. Two Earth boys named Bernard and Rodney have to save the world from the alien penguins, by obtaining and wielding various weapons and building penguin-killing machines. Meanwhile, the mutant penguins are trying to trigger the Doomscale and destroy the Earth.

Interestingly, Mutant Penguins constitutes one of the first entries in the Tower Defense genre, long before the concept was popularized by StarCraft and Warcraft maps.