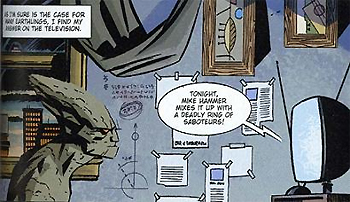 Everything Martian Manhunter knows about this planet, he learned from television. Which explains a lot.
"Hello, Megan! I'm on Earth!"
"I'm actually on Earth! I've wanted this for so long... even if it's not exactly like TV."
— M'gann M'orzz, Young Justice (2010)
Advertisement:

For about a hundred of our Earth years, our planet has been a noisy little mudball when it comes to radio signals. A very common plot amongst science fiction authors is to depict aliens as having made contact with Earth culture via stray TV broadcasts.

One bit of science that these writers surprisingly get right consistently is that radio signals propagate at light speed. Given that on TV distances are conveniently measured in light years, it's an easy conversion formula: aliens 50 light-years from Earth are just now getting TV signals sent in the 1970's, thus the visitor that shows up, having skipped the intervening distance via Faster-Than-Light Travel, will talk and dress like a Disco Dan in an attempt to fit in. Hilarity Ensues, or it provides a vital clue to the protagonist that something isn't quite right about this guy.

There are some major technical problems with this concept, but most writers will ignore them. First of all, non-directional broadcast signals (like TV and radio signals) cannot be received beyond a fraction of a light year even by much more powerful telescopes than the ones available,

so it shouldn't be that surprising that we have not been receiving any of their transmissions, even if they have radio technology (or maybe they all read books on their planet). Directed radio signals (like radar signals) can be possibly received thousands of light years away but can be detected in a far smaller area and may not even be recognized as sign of extra-terrestrial life.note The infamous "Wow! signal" is an example of this; although it demonstrates all the characteristics of an interstellar signal, no one is sure whether it was natural or artificial. Another scientific theory is that they've developed a different form of communication that doesn't depend on radio broadcasts, and all of their surviving transmissions from when they did have already passed us by.note Ignoring the fact that space is both vast and far nosier than we could ever be. Accounting for radio bursts from sources such as rapidly rotating black holes, pulsars, neutron stars, quasars, and magnetars, etc, etc and that's not even including collisions or other cataclysmic events like super/hypernovas, there's simply too much background noise and radiation for exosolar civilizations to make themselves heard.

One thing's for sure though, we humans are using fewer huge and ultra powerful transmitters as time goes on, and using more and more much smaller devices with much more complex signals. A skilled alien equivalent of SETI might crack FM Radio or maybe conventional analogue TV, but the stuff coming out of a mobile phone base station doesn't even have an obvious carrier wave frequency. That leaves a 100 year long 'pulse' of intelligible broadcasts, with silence before and low power white noise after, and such a thing might be easily missed in the vastness of space if a SETI program didn't happen to be looking the right way with the right kit at the right time.

Regardless, misunderstandings and misinterpretations about Earth culture and human behavior from tiny snippets of old sitcoms are comedy gold especially if it means they expect Earth to be like that, if they learn their English from it it justifies Aliens Speaking English and so the concept keeps coming back up. Compare Alien Arts Are Appreciated and Aliens Steal Cattle. See also Do Not Adjust Your Set for when the aliens are broadcasting to us instead.

Aliens get caught up to speed.

First order of business upon finding a world to invade? Information gathering. What better way than to learn the language and simply intercept the communications?

Aliens get caught up to speed.

First order of business upon finding a world to invade? Information gathering. What better way than to learn the language and simply intercept the communications?