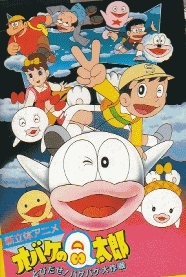 Little Ghost Q-Taro (or Obake no Q-Tarō in Japanese) is a series created in 1964 by Fujiko Fujio. The series is about a mischievous ghost named Q-Taro who lives with the Ōhara family. Q-Taro likes to trick people, though he has a fear of dogs. Q-Taro tries to aid his friend Shōta Ōhara, a boy in grade school.

In 2018, 4 volumes of never-before-seen comics were released.

Q-Taro inspired the ghosts in Pac-Man.

Question, question, do you know my tropes?