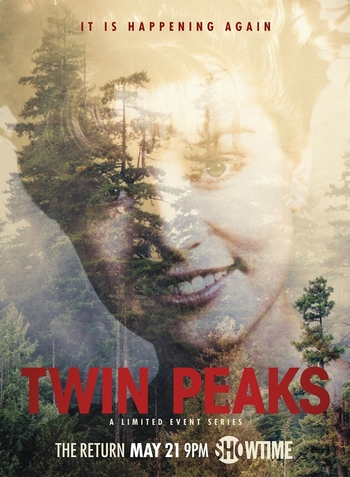 "Through the darkness of future past,
the magician longs to see.
One chants out between two worlds...
'fire, walk with me.'"
— Philip Michael Gerard
Advertisement:

Twin Peaks is a Genre-Busting early-nineties television series created by David Lynch and Mark Frost. Starting out as a hybrid Crime Time Soap/Detective Drama, premiering on April 8, 1990 as a Midseason Replacement on ABC, it quickly took off for parts unknown with a pervasive supernatural element. The series revealed itself to be an Occult Detective story with very surreal elements, that smacked of off-kilter Magic Realism. Basically, it had a little bit of everything.

The story takes place in Twin Peaks, Washington, a sleepy rural slice of Americana where everyone seems to know everyone. Eccentric FBI agent Dale Cooper is called to the town after Laura Palmer - a high school senior and homecoming queen - is discovered dead and wrapped in plastic.

Cooper teams up with Harry S. Truman, the town's trusty (though skeptical) Sheriff, as they investigate the murder, which Cooper believes may be linked to an unknown serial killer he has been tracking for years. It quickly becomes apparent that everyone in Twin Peaks has their own secrets to hide, and Laura's shocking death may be the powderkeg to bring it all out into the open. Meanwhile, Cooper finds himself visited by enigmatic dreams and visions, which he believes may be the key to finding the true culprit.

The eight-episode first season of Twin Peaks was a surprise ratings success - to the point of denting the competing goliath that was Cheers - and it was renewed for twenty-two more episodes. This ended up causing numerous problems, mainly because the showrunners had never really expected or intended for the show to run that long; they were also forced by ABC to conclusively answer certain key mysteries in the middle of the season, undercutting the narrative of the show. To justify Cooper remaining in Twin Peaks, an old foe from his past arrives in town to menace him in cryptic ways, and this storyline eventually dovetails with the Laura Palmer murder. The 1992 movie Twin Peaks: Fire Walk with Me functions as both a prequel and a sequel, though infamously does not resolve any of the plot lines left hanging in the series.

As the series was a huge ratings draw for a time, it naturally influenced and inspired several others across all media. Aside from being the first live-action TV series to have feature film-quality production, it also paved the way for shows like The Sopranos (which stole its dream sequences), Carnivàle (whose own showrunners/creators drew heavily on the mystical Manichaean themes and crypto-Masonic imagery that were Mark Frost's signatures in Twin Peaks) and The X-Files (which also featured FBI agents investigating paranormal cases). It also has a notable influence on the animated series Gravity Falls in terms of setting and focus on both mysteries and supernatural elements. As far as video games influenced by Twin Peaks go, they range from the obvious like Mizzurna Falls, Deadly Premonition, Silent Hill, Alan Wake, and Thimbleweed Park to the less so like Nelson Tethers: Puzzle Agent, Lone Survivor, Max Payne 2, Life Is Strange, Disco Elysium, and even The Legend of Zelda: Link's Awakening.

After years of rumors of a return, a sequel series titled Twin Peaks: The Return premiered on Showtime in 2017. As referenced in a cryptic line from the first season, we return to Twin Peaks 25 years later. Lynch and Frost returned as showrunners along with a large section of the original cast. The resulting season majorly ups the surrealism factor of the story and provides a final resolution (such as it is) to the series. Following The Return, both Lynch and Frost have expressed interest in possibly making a fourth season at some point, but Lynch also stated that will be at least a while before he gets around to that decision, although he has hinted the Sequel Gap won't be as drastic this time around.

"I've got to find out what kind of tropes these are—they're really something..."

"What year is this?"