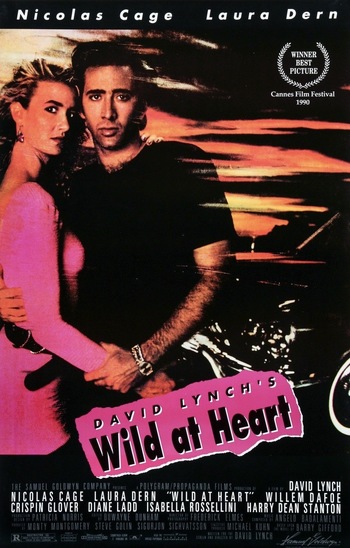 It's like an old Elvis Presley movie done by David Lynch!
Advertisement:

Wild at Heart is a 1990 dark comedy/crime/road movie written and directed by David Lynch while he was taking a break from Twin Peaks, based on the novel by Barry Gifford.

The film follows Sailor (Nicolas Cage), a recently released convict, and his lover Lula (Laura Dern) going on a road trip from North Carolina to California in order to escape the clutches of Lula's extremely overbearing mother Marietta (Diane Ladd). As they travel and come across Lynchian situations, Marietta has both of her boyfriends (Harry Dean Stanton and J.E. Freeman) try to track down Lula and dispose of Sailor. Hilarity, Elvis Numbers and Oz Allusions Ensue.