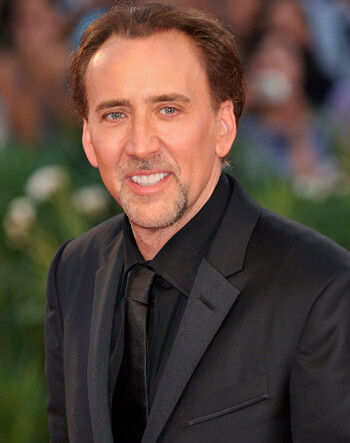 "Cage is a good actor in good movies, and an almost indispensable actor in bad ones."
— Roger Ebert on Drive Angry
Advertisement:

Nicolas Kim Coppola (born January 7, 1964 in Long Beach, California), known professionally as Nicolas Cage, is an American actor, known for collaborating many times with film producer Jerry Bruckheimer. He changed his last name to Cage (after Luke Cage and the composer John Cage) because his uncle is the great director Francis Ford Coppola, and Cage didn't want an unfair advantage pursuing success in film on his own effortsnote and because people wouldn't stop quoting his uncle's films at him.

Cage pursued acting as a career, making his debut on television in 1981. Cage has featured in numerous "bad boy" roles, and has won numerous awards, beginning in 1989 with his Independent Spirit Award, an Academy Award for Best Actor for his lead role in Leaving Las Vegas, and his most recent Toronto Film Critics Association Award in 2002. Cage has appeared in over 60 films including Face/Off (1997), National Treasure (2004), and Ghost Rider (2007).

Leaving Las Vegas and the Palme d'Or-winning Wild at Heart (directed by David Lynch) are probably the most noteworthy things he's been involved with. After appearing in a string of flops from the late 2000s to early 2010s and accruing an enormous tax debt to the IRS, he became better known for churning out DTV movies made purely for the money. Then he swung back with films like Mandy and Pig which showed that he can still create compelling performances when provided with a good script and direction.

His interesting acting choices, and the broad range of quality in his filmography, has made him the subject

of Memetic Mutation over the years. Cracked.com once pitched the theory that he is attempting some sort of experiment where he takes only the best and worst films offered to him, and absolutely nothing in between. Others might say that he just takes any role offered to him

, because he loves what he does.

Cage's style of acting is idiosyncratic enough that Roger Ebert named a specific trope after him; the Nicolas Cage Wig-Out Scene, as nobody plays a grown man throwing a screaming tantrum quite like Mr. Cage, and for a while it seemed an indispensable part of every one of his films. It's been lampshaded and parodied by Saturday Night Live's own Andy Samberg for the Weekend Update segment "Get in the Cage" (one such segment even had the real Nicolas Cage as a clone of Samberg's Cage created so Samberg's Cage can star in every movie ever made).

He is an avid comic book fan, with his surname coming from Marvel Comics' Luke Cage, and naming his second son Kal-El (so his son's full name is Kal-El Coppola Cage). He played Ghost Rider, and was considered for Superman in a movie that struggled and never came out. (He eventually got a chance to voice him, however, in Teen Titans Go! To the Movies.) In 2010, he got a serious fanboy moment co-starring in Kick-Ass as Crazy Is Cool badass Big Daddy, who wipes out warehouses full of mobsters single-handedly.

Cage is also the subject of another popular meme, "Nic Cage as Everyone

", which is photo manipulations of Nicolas Cage as film/TV characters, historical figures and current celebrities. Beware, serious Uncanny Valley ahead; albeit done in utterly hilarious fashion. You will not look at The A-Team the same way again. Especially Baracus. He also has several memetic songs made from

which have also become memetic.

...And when you thought things couldn't get weirder, turns out there's a Grindcore band based on his movies.

And also a Horrorpunk band named after the gravesite he purchased in New Orleans.

He is also the universal constant which unites us all. After all, that was the plan: to give you a boner. And you got one. Congratulations, you're human.