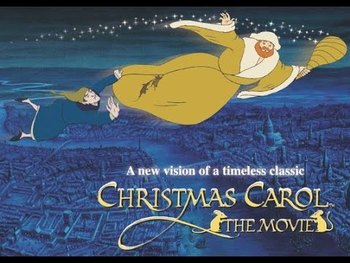 Christmas Carol: The Movie is a rather bizarre adaptation of Charles Dickens' A Christmas Carol, made in 2001. It stars Simon Callow as Charles Dickens and Ebenezer Scrooge, Kate Winslet as Belle, Beth Winslet as Fan, Rhys Ifans as Bob Cratchit, and Nicolas Cage as Jacob Marley. It was directed by Jimmy T. Murakami, who also did The Snowman and When the Wind Blows.

The movie opens in live-action, where Dickens explains to his audience that A Christmas Carol really began with a mouse, named Gabriel, who represents the hope of the Christmas season. From there it transitions to animation, where, among his usual nasty deeds, Scrooge sends Old Joe to accost people who don't pay his debts and throws a bucket of cold water on the caroling Tiny Tim, which will lead to his illness and death should Scrooge not reform. To this end, Scrooge is haunted by his old partner Jacob Marley and the three spirits of Christmas in hopes of mending his ways.