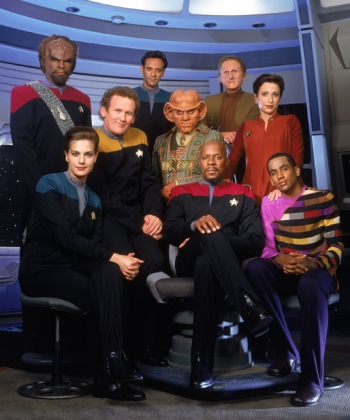 Star Trek: Deep Space Nine is the second of the "next generation" of Star Trek shows, airing after The Next Generation for two years, then alternating with UPN's Voyager for the remaining five years. The show was aired from 1993 to 1999, and like TNG, was offered through First-Run Syndication as opposed to any exclusive television network. Set on an orbital space station, DS9 traded the Wagon Train to the Stars premise for "Fort Apache in Space". Ira Behr, the showrunner, cited The Rifleman as another influence (particularly the father-son dynamic).

When we last left Next Gen, the remote world of Bajor had just booted out its occupiers through a war of attrition and a fair amount of terrorism. With the planet spiraling into disorder, Starfleet sends a detachment of officers led by Commander Ben Sisko as a diplomatic liaison to provide aid. They take up residence at a Cardassian station, rechristened Deep Space 9, as a makeshift Starfleet outpost. In the pilot, a one-of-a-kind stable wormhole leading to an uncharted corner of the galaxy is discovered. Instantly, Bajor is transformed from a rustic backwater into the most valuable piece of real estate in the quadrant, and DS9 is assigned to monitor the wormhole's traffic. The appearance of the wormhole is seen by the Bajorans as fulfilling a religious prophecy and Sisko is declared to be "The Emissary". The fixed base allows the show to delve more deeply into the politics of Star Trek, but the appearance of the wormhole also catches the attention of the Dominion, a less cuddly counterpart to the United Federation of Planets.

Advertisement:
What made DS9 unusual in Trekdom is that every action has consequences. Part of that was due to former TNG writers (namely Ira Behr and Ron D. Moore) rebelling against Gene Roddenberry's spotless, optimistic future: at the beginning of the story nobody on the station or on Bajor particularly got along with each other and, unlike the ship-based series that had come before, the crew couldn't just 'jump to warp' and leave the Problem of the Week behind with no repercussions. The show employed Myth Arcs more extensively than other Treks, and by shifting the focus away from Starfleet's bold explorers to DS9's overworked jarheads, the writers were able to scrutinize the Federation as it appears to outsiders: a toothless alliance which still has problems with bureaucracy and some skeletons in its closet. Though the show still comes across as optimistic about the future of humanity, it asks several questions about the Federation's place in the galaxy and the capacity for humans to accomplish great things — even if those great things become I Did What I Had to Do.

While all Trek shows have large casts, DS9's is especially large. Consequently, the show is overrun with Fake Guest Stars, Aron Eisenberg (Nog), Max Grodenchik (Rom) and Andrew Robinson (Garak) standing out in particular; all three characters debuted within the first two episodes and held prominent roles all the way up to the series finale. This is a show which could do a Bottle Episode starring people who aren't even in the opening credits: one focused on Nog's recovery from a war injury with the help of a second recurring guest, and another on the disappearance of an Ascended Extra who never once had a line.

Deep Space Nine is very frequently compared to Babylon 5, the other 90's cult Space Opera show set on a space station incorporating matters of faith, interstellar war, and Deconstructing the future. Indeed, there are frequent accusations that the two shows ripped each other off. J. Michael Straczynski has implied that Paramount effectively stole a treatment he pitched to them and stuck a "Star Trek" brand on it.

As of October 2011 the complete series is available on Netflix streaming in the United States (where, by many reports, it has been far more popular than it was in rerun broadcast and is a staple of the service). For that matter, it is also on Amazon Instant Video, Hulu and Paramount+ as well, so basically you're covered if you're signed up on any of these. Alongside all the other Trek shows and films, DS9 was made available in its entirety in Netflix Europe in 2016.

In 2017, Ira Behr and Adam Nimoy announced they were crowdfunding a documentary about the series, What We Left Behind: Looking Back at Star Trek: Deep Space Nine

, which was released in June of 2019. In addition to bringing back most of the major players (including Aron Eisenberg and René Auberjonois before their untimely deaths), the film examined DS9's cultural impact, particularly its post-wrap rise in popularity in syndication and streaming, and featured Behr getting the old writers' room together to plot a "what if" season 8 pilot.

Related works in the Star Trek Expanded Universe include the Terok Nor trilogy, a sub-series of Star Trek: The Lost Era which chronicles the Occupation of Bajor and features many of the Bajoran and Cardassian characters, and the Star Trek: Deep Space Nine Relaunch continuation series; Star Trek Online features DS9 as a player hub, with many of the characters from the show (voiced by their original actors) returning for the Victory is Life expansion.