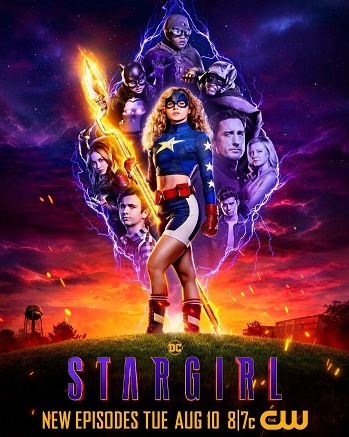 DC's Stargirl, or simply Stargirl, is a superhero teen drama, based on the DC Comics character of the same name. Geoff Johns, who co-created Stargirl, also created the show and serves as an executive producer. It premiered on May 18, 2020.

Courtney Whitmore (Brec Bassinger), a high school sophomore, moves from Los Angeles to the town of Blue Valley, alongside her mother, Barbara (Amy Smart), stepfather, Pat Dugan (Luke Wilson), and stepbrother, Mike (Trae Romano). Her life takes an unexpected turn when she discovers a powerful staff of cosmic power and learns Pat used to be the sidekick of famed superhero Starman (Joel McHale). With the staff now in her possession, Courtney decides to inherit Starman's legacy as Stargirl and inspire a new generation of heroes. Joined by her new friends from school: outcast Yolanda Montez (Yvette Monreal), nerdy Beth Chapel (Anjelika Washington), and delinquent Rick Tyler (Cameron Gellman), she reestablishes the Justice Society of America, a superhero group that Pat and Starman were members of.

The first season has the group battling the Injustice Society of America, the one responsible for the destruction of the first JSA ten years ago. The ISA includes Icicle (Neil Jackson) and Brainwave (Christopher James Baker), both of whom have children who attend Blue Valley High: Cameron Mahkent (Hunter Sansone) and Henry King Jr. (Jake Austin Walker). In the second season, the ISA is reformed by Cindy Burman (Meg DeLacy), the school's most popular student and daughter of the villainous Dragon King, as she teams up with Eclipso (Nick Tarabay).

Originally announced in 2018 to be streaming exclusively on the DC Universe platform, it was later revealed that Stargirl would also be broadcast on The CW the day after each new episode drops. The first two episodes had some scenes removed to allow commercials to be broadcast, but according to Johns, the show would be "almost identical" in both platforms starting from the third episode onward. In July of 2020, it was announced that the show has a permanent residency on The CW from Season 2 onward.note Streaming rights to the series transferred to HBO Max, but the show will not be simulcast on that platform.

The show's cast made their debut in the final part of Crisis on Infinite Earths, which placed it in the Arrowverse's Earth-2. It is otherwise distinct from that franchise, although John Wesley Shipp crossed over in the second season of Stargirl, reprising his role of Jay Garrick.note His appearance suggests that, as the pre-Crisis Earth-2 was implied to not have a Jay Garrick, the multiversal reboot saw fit to correct that.

Two seasons have been aired so far, and a third one has been ordered. According to Bassinger, Geoff Johns has enough plans for at least five seasons of the show.

Not to be confused with the 2000 middle grade novel Stargirl, nor its (coincidentally timed and similarly distributed) 2020 film adaptation on Disney+.