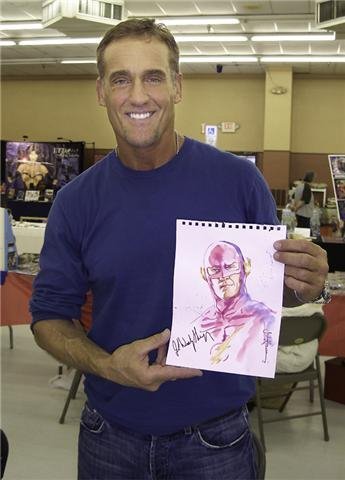 Primarily, he is heavily associated to the iconic DC Comics hero The Flash, appearing in many of its television adaptations. So far, he has played Barry Allen himself in the short-lived CBS show (notable for being the first time the character appeared as the lead in live-actionnote The Flash first appeared in live-action in the Legend of the Superheroes TV specials back during The '70s), voiced Barry's Arch-Enemy Eobard Thawne/Professor Zoom in an episode of Batman: The Brave and the Bold, and played both Barry's father, Henry, and the first Flash in the comics, Jay Garrick, in the 2014 reboot of the series that currently airs on The CW.

Outside of The Flash franchise, he is well-known for his work as Mitch Leery, the father of the titular Dawson's Creek, and for his several roles in daytime Soap Operas including Kelly Nelson on Guiding Light, and Douglas Cummings on As the World Turns (which earned him his first Daytime Emmy Award).

He is from the very same city as the current TV Flash, Grant Gustin: Norfolk, Virginia.