Western Animation / Batman: The Brave and the Bold 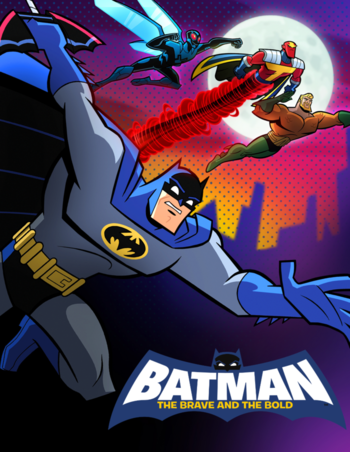 "Batman's rich history allows him to be interpreted in a multitude of ways. To be sure, this is a lighter incarnation, but it's certainly no less valid and true to the character's roots as the tortured avenger crying out for mommy and daddy."
— Bat-Mite breaks the fourth wall to describe this incarnation of Batman
Advertisement:

The second non-DCAU Animated Adaptation of Batman by Warner Bros., announced after The Batman ended.

Taking its name from DC's traditional Team-Up Series, Batman: The Brave and the Bold has Batman partnering with a different superhero or superheroes every week. With a primary focus on rarely used (but classic) characters such as Red Tornado, Detective Chimp, and even 'Mazing Man the show takes many of its plotline inspirations from old Silver Age stories. The show's creators aim to spotlight every possible underrated aspect of the DC universe. In order to showcase as many heroes and villains as possible, The Teaser is often a standalone mini-adventure in itself, giving every character a chance to shine.

It's a light-hearted take on the DC Comics mythos, with a high gag-per-minute level, very little secret-identity drama, and mainly goofy villains like Clock King and Gorilla Grodd. The massive number of obscure cameos and canon throwback jokes make the whole series into a big, campy collection of Continuity Porn. In general, it's not that far from the style of the '60s Batman show. There's a Musical Episode starring Neil Patrick Harris, a crossover with Scooby-Doo which also animates an old MAD parody titled "Bat Boy and Reubin" and Bat-Manga and stars "Weird Al" Yankovic, and a Cold Open team up with Space Ghost.

The show is way over on the silly side of the Sliding Scale of Silliness vs. Seriousness, but it also has a number of Wham Episodes: the show provides its own versions of The Rainbow Batman and Bat-Ape

just as happily as it references The Killing Joke and Batman: The Dark Knight Returns.

The show is notable for having the first animated appearance of the Blue Beetle, specifically the third Blue Beetle Jaime Reyes (though Dan Garrett and Ted Kord also make posthumous appearances). It's also the animation debut of the Outsiders (as a team, anyway; Metamorpho had a supporting role on Justice League). Among them are Black Lightning and Katana, finally making their official debuts in animation. It also marks the first television appearance of the original Flash, Jay Garrick, as well as the Jack Kirby creations Kamandi, The Last Boy on Earth and O.M.A.C.: One Man Army Corps. And when A-lister Superman finally appears in season three, his character-centric episode consists of half an hour of nods to Superdickery.

The show's first season was originally supposed to run for 13 episodes before a break, but it was so well received that the break until the next episode aired was shortened to a single week, extending the first season well past its original run. After three excellent seasons, the creators decided to wrap up the show. A darker CGI series dubbed Beware the Batman succeeded it in 2013.

This series has Batman: The Brave and the Bold - The Videogame as a side-scrolling video game adaption released in 2010. While the gameplay received positive to mixed reactions, its presentation is agreed to be staying true to the series.

The series was briefly revived in the 2018 film, Scooby-Doo! & Batman: The Brave and the Bold, a crossover with the Scooby-Doo franchise.

This series has a separate Characters Page and a Recap Page. It also has an Ensemble Darkhorse page.