Your Eyes Can Deceive You 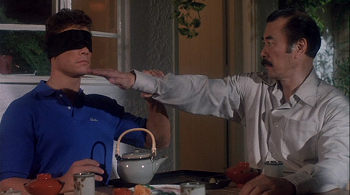 Obi-Wan: This time, let go your conscious self and act on instinct.
Luke: With the blast shield down, I can't even see. How am I supposed to fight?
Obi-Wan: Your eyes can deceive you. Don't trust them.
— Star Wars, A New Hope
Advertisement:

In an attempt to show the supernatural affinity of a character with the skill he is training, The Mentor will cover the pupil's eyes with a piece of cloth, and say some "Don't 'see' the enemy, 'feel' the enemy". A really key part of this is that the student always complains (either first thing or after getting their ass handed to them), and it rarely comes up again.

In Real Life, this would only make sense if the skill itself involves an invisible element, or if the practitioner is expected to perform the skill under low- or no-visibility conditions (thick smoke, underground, eyes gouged out, etc.) Soldiers in a Training Montage may field-strip their weapons, disarm bombs, or perform other precision tasks while blindfolded for this reason. Super Soldiers do it instead of (or while) smoking, usually during the briefing sequence or the calm before the climactic battle scene. The goal of blindfolded training in martial arts is not to teach someone to fight blind, but merely to speed up reaction time so as to not get caught by surprise, blind or not.