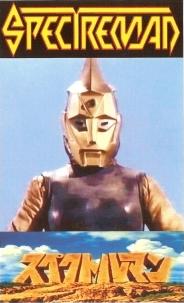 "We will never know the source
Of his power and his force
As he guides his planet's course
Spectreman!"
— Lyrics from the English dub's Expository Theme Tune
Advertisement:

Banished from the peaceful simian Planet E, the mad scientist Dr. Gori and his brutish assistant Karras (Lla in the Japanese version, as in "gorilla") search for a new planet to rule after Gori's plot to conquer Planet E had been foiled by its government. Coming across the Earth, Gori is captivated by its beauty, but is appalled by its inhabitants' misuse of its environment, leading to severe pollution (a huge topic back when this series was made), so mankind must be quickly conquered if this planet is to be inhabitable, so he plots to, ironically, use the very same pollution that's plaguing the Earth to create horrible giant rampaging monsters to wipe out and/or enslave mankind.

Fortunately, hope comes in the form of the Nebula 71 Star, a Saturn-like artificial satellite that observes the Earth incognito. Fearing that Gori may eventually make the Earth uninhabitable, they dispatch Spectreman, their super-cyborg agent, to battle the menace of the mad apeman. Spectreman disguises himself as a Japanese man named Jōji Gamō to walk among the humans and scout out Gori's weekly menace for the Nebula 71 Star. He works with a government-run group called the Pollution G-Men, run by Chief Kurata. This group investigates phenomena involving pollution, but they don't (until late in the show's run) have the facilities to handle giant monsters, so unbeknownst to them, their comical-yet-mysterious teammate Jōji disappears on them, only to help them as Spectreman!