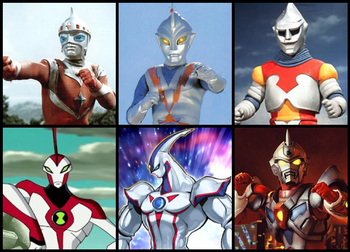 The Ultra Series is one of the oldest and most influential Toku franchises of all time, being the creator of the Kyodai Hero subgenre (with "Kyodai" literally meaning "giant" in Japanese). As First Installment Wins, the original series has become very iconic and commonly homaged in pop culture, as has the titular Ultraman himself.

As a result, there have been no shortage of many Ultraman-like heroes both from Tsuburaya Productions themselves (the producers of the Ultra Series) and other studios, mainly in the 1970's thanks to the popularity of the Ultra Series leading to multiple shows with a similar formula in an attempt to capitalize on its success, later on after the initial craze of the series died, homages began to take the place of these competitors.

To identify them, there's a collective of characteristics that are iconic to Ultraman and a dead-ringer for a deliberate homage that the character should have:

Not all these criteria have to met at once - even within the Ultra Series itself there are some divergences from the pattern.

Sub-Trope to Fountain of Expies and Stock Parodies. See also Mech vs. Beast, with which this trope sometimes overlaps.

Way Big resembles Ultraman to begin with. Ultimate Way Big fights like Ultraman, even performing a "rise" after transforming.

Way Big resembles Ultraman to begin with. Ultimate Way Big fights like Ultraman, even performing a "rise" after transforming.