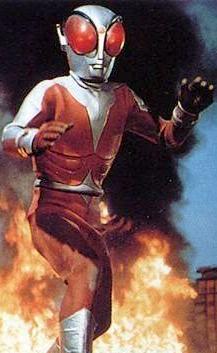 Fireman, also known as Magmaman in other markets, is a 1973 series made by Tsuburaya Productions of Ultra Series fame. Perhaps one of the first adult-oriented tokusatsu out there, Fireman lasted for 30 episodes and aired on Nippon Television.

In the last few years, Earth has been experiencing all sorts of strange phenomenon, causing kaiju to appear around the globe. In response to this threat exists the paramilitary organization Scientific Attack Force (SAF), and among their team is archaeologist Daisuke Misaki. Unbeknownst to his teammates though, Daisuke is in fact one of a race of ancient but advanced humanoids from the underground continent of Aban. The Aban people have sent Daisuke out to protect the surface world, and by drawing upon magma energy with his trusty Fire-Stick, Daisuke is able to transform into a gigantic fire-powered superhero to battle the weekly kaiju threats and the occasional alien invader.

Fireman was created by Tsuburaya as part of their celebration of the company's tenth birthday (alongside Jumborg Ace and Ultraman Taro), and while it was ultimately short-lived, the character has not been forgotten by TsuPro. In 2011, Fireman was homaged by the Ultra Series film Ultraman Zero: The Revenge of Belial with an Expy named Glen-Fire.