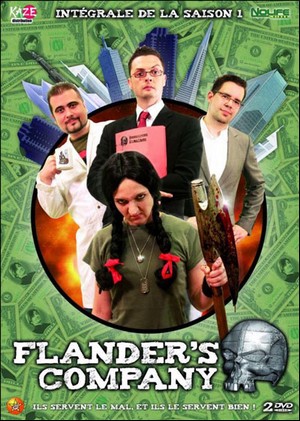 Flander's Company is a French amateur series, airing on the Nolife

broadcast and edited for DVD in 2009 by Kaze

The title company aims at providing heroes worthy foes, and as such recruits, trains and supports Supervillains. The series follows its employees in their daily routine.

The first season is centered around Hippolyte and his job, and features a lot of Application of the Week episodes, but starting with the second, it becomes a lot less repetitive, with genuine story arcs, and other regulars are featured more prominently, even if Hippolyte is still the main character.

Budget is non-existent (at least in the beginning), so there is no set and almost everything is shot during weekends in the offices of French Animation magazine Animeland

, hence the anime DVDs and posters in the background. The show's creator and co-writer, Ruddy Pomarede, also directs, acts (as Caleb), edits and does the visual effects. All this on his free time, which explains the slow production (twenty short episodes a year).

The overall style is very cartoonish, so the fact that everybody overacts does not ruin the show, but participates to the general mood.

Unlike Flanderization and Stupid Sexy Flanders, has nothing to do with Ned Flanders.