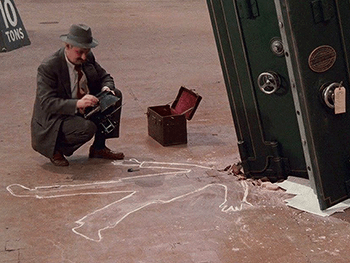 "Murder?" "I'd say that's a safe bet."
Ya better watch how you talkin'
And where you walkin'
Or you and your homies might be lined in chalk!
— Coolio, "Gangsta's Paradise"
Advertisement:

Ah, the chalk (or more rarely, tape) outline to indicate where the murder victim once was.

The real life history of the practice is not as clear cut as most would think. The practice was originally never part of actual police procedure; after all, the standard explanation of needing to know where the body was after it is removed is laughable when taking photographs of crime scenes is standard practice. It seems to have come to be as a way of allowing the media in the inter-war years to film/photograph crime scenes without having to show the actual bodies. This practice died out as forensic evidence became more important and the media became less concerned about showing bodies.

This is not to say that the police never draw around a body in Real Life. In reality, police procedure almost never requires a chalk outline — chalk is impractical, prone to weather-related erosion, and contaminates the crime scene with a foreign substance, which seriously hampers an investigations or criminal proceedings at a later date. Not to mention that an outline wouldn't show anything useful about the body that a cursory visual examination wouldn't reveal. Therefore it is usually reserved for victims who are not dead and require immediate medical attention in places where contamination is less of a concern, most often road traffic incidents. Even if contamination is a concern, the police might note the location of the head with a cross or dot of chalk if they have to move the victims immediately.

Instead of chalk, police now indicate the locations of items of interest using removable flags that don't contaminate the crime scene. These are typically free-standing and marked with numbers so that investigators can keep track of where everything was located and what they refer to.

Subversions and parodies are now the mainstay of this trope with all manner of strange visual gags involving confusingly shaped outlines, outlines in strange or impossible places or, quite popular, a corpse that has been shattered or dismembered having every part outlined individually. Nevertheless it does still turn up played straight whenever there is a desire not to show bodies, either for plot reasons or because of the intended air time of the program.