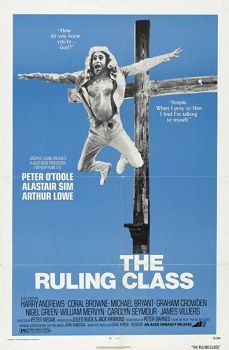 The Ruling Class is a 1972 British black comedy film, and an adaptation of Peter Barnes' satirical stage play which tells the story of Jack Gurney, a paranoid schizophrenic British nobleman (played by Peter O'Toole) who inherits enormous power and privilege in Great Britain. His family (and neglected heirs) attempt to steer him into siring an heir which they can look after (along with the massive estate) while Jack, the 14th Earl of Gurney, is tucked back into a straightjacket. The biggest obstacle: he's convinced he's Jesus Christ.

The film co-stars Alastair Sim, William Mervyn, Coral Browne, Harry Andrews, Carolyn Seymour, James Villiers and Arthur Lowe. It was produced by Jules Buck and directed by Peter Medak. The film is a "commercial failure [...that] has since become a cult classic"; Peter O'Toole described it as "a comedy with tragic relief".