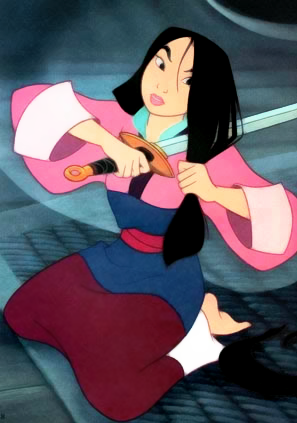 And then she decided to change her life.
Hitomi: Goodbye, old me.
SFX: SNIP snip snip snip snip
Hitomi: Hello, new beginnings.
— Inside Out
Advertisement:

When a character cuts off their hair, it often symbolizes a rite of passage or bout of character growth. A princess striking out on an adventure, or a new recruit at boot camp, for instance. Parting with it voluntarily can be greatly symbolic.

This is particularly a big deal when women get haircuts because their long hair takes a lot of time to grow and Long Hair Is Feminine, doubly so if the new haircut is completely shaven or bald. Yet in fiction, even an accidental hair slicing can leave a character with a surprisingly even cut.

In many religions (Western Christianity, Ancient Egyptian religion, and others) priests and/or monks cut/shave their hair. Roman Catholic nuns also tend to cut and maintain their hair short under their veils when they enter the nunneries. The cutting of one's own hair is also a part of Buddhism, specifically something done by Siddhartha himself early on in his path to enlightenment, so anime examples might draw from this as an allusion. There are also some cultures, including Native American and many Asian ones, where a person would cut his or her hair as an act of grief, disgrace, or even rebellion. In the Confucian tradition, hair (like the rest of your body) is considered a gift from your parents and may not be damaged without a good reason. Furthermore, prisoners and psychiatric patients commonly have their heads shaved, often to prevent the spread of lice, but sometimes also as a demeaning measure.

Having the head shaved can be a punishment prescribed in law, but also something done as "mob justice". An infamous example of this was the thousands of European women who had their heads shaved in front of cheering crowds in the wake of World War II, in particular by the communist groups in France, as punishment for associating with occupying Germans during the war.

However, an important haircut can also be positive, such as changing one's style after a breakup or overcoming the fear of hair loss by just shaving it off.

The opposite of a Hair Reboot. If it comes after a Heel–Face Turn may result in switching their Good Hair, Evil Hair around. May also occur after or during a Close-Call Haircut. If it's involuntary, it's likely a Traumatic Haircut (though it can also be concurrent if it also involves an important change to the character). If the hair is changed in order to show a change in characterization, this may also be an Expository Hairstyle Change.

After Alexandra found out her father was killed in fight to ensure the safety of the Great Balete Tree, she decides to become the new Babaylan-Mandirigma, a human who's meant to protect the human race from the supernatural.

After Alexandra found out her father was killed in fight to ensure the safety of the Great Balete Tree, she decides to become the new Babaylan-Mandirigma, a human who's meant to protect the human race from the supernatural.