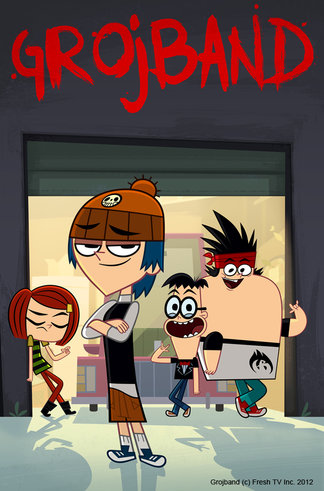 Grojband is a Canadian animated music/comedy series produced by Fresh TV (of Total Drama and 6teen fame) and the indie animation company Neptoon Studios. It was created by the founders of Neptoon Studios, the Canadian animation duo Todd Kauffman and Mark Thornton, who were previously known for working on Total Drama's first two seasons, as well as Sidekick (with Total Drama and 6teen creators and Fresh TV founders Jennifer Pertsch and Tom McGillis serving as executive producers for the show).

Quirky and charismatic 13-year-old Corey Riffin starts a Garage Band with his best friends, the grounded tomboy Laney Penn and zany non-identical twin brothers Kin and Kon Kujira. However, the newly founded Grojband has a problem: Corey's not good at coming up with lyrics. He just can't think of anything songworthy to write... that is until he finds the Secret Diary of his bratty 16-year-old Big Sister Bully Trina and realizes that her handwritten teenage angst is a goldmine of songwriting inspiration!

And so begins the series' formula. In nearly every episode, Corey and his band strike a new musical gig and must create the perfect song that will blow the socks off their audience and help them climb up the ladder to Rock & Roll stardom. However, Trina utterly loathes her little brother's garage band and will stop at nothing to crush their dreams of becoming the greatest band in history. But no matter what challenges Grojband encounters, nothing's going to stop Corey and his friends from doing what they always do best Once per Episode: A) rile up Trina's emotions enough for her to go into "Diary Mode" so she can write down her thoughts; and B) "secretly" take inspiration from Trina's brand-new diary entry to craft the lyrics for an awesome new tune that will truly rock and totally roll.

Grojband made its world debut on June 10, 2013, but unusually, it premiered in the United States first rather than in Canada, being one of many Canadian imports prominent on Cartoon Network at the time (although the Americans did have some minor involvement in the show's development process). The show did eventually arrive in Canada on Teletoon on September 5, 2013, but had already finished airing its first 13 episodes in the States by then. The series suffered from some wonky scheduling during its time on air, with the second half of the first season being delayed for nearly two years in both the US and Canada. The remaining episodes eventually arrived on TV on February 22, 2015 on Boomerang in the States, with Teletoon airing them a month later, but the show's cancellation was announced shortly afterwards. At only 26 episodes, it is Fresh TV's shortest-lived standalone series. While Grojband never achieved the same level of success or popularity that Fresh TV's more famous works did during its brief but intense life on the small screen, this wild and offbeat little show nonetheless has an immensely passionate cult following.

There is also a fairly extensive Wiki

and an official production blog

open/close all folders
A-E
F-K
L-O
P-R
S-Z
Thanks for coming out, everyone!
Feedback

Example of:
The Can Kicked Him