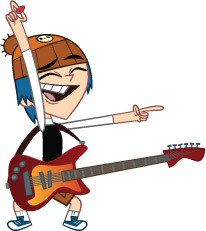 "Lemme solo here for a sec."
Voiced by: Lyon Smith

The series protagonist, lead guitarist/singer of Grojband, and Trina Riffin's younger brother. Corey is a confident, energetic, and optimistic 13-year-old boy determined to make his band the best there is, despite his minute attention span and inability to see the obvious. He is always on the lookout for new gigs that Grojband can play and uses Trina's diary entries as inspiration for the lyrics to his band's songs.

"When you're in love, even doing nothing at all is wonderful."
Voiced by: Bryn McAuley

The bassist, self-appointed band manager, and only female member of Grojband (though she's often mistaken for a guy, to her eternal frustration). Laney is a spunky, sarcastic, and outspoken tomboy who stands out as the most versatile musician of Grojband and the only person with the strength to rein in her bandmates' eccentric personalities. She also has a huge crush on Corey, not that he ever notices it. 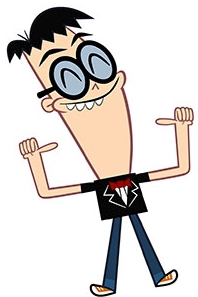 "I think I can build something that'll help us... or cause untold horrors!"
Voiced by: Sergio Di Zio

The twin brother of Kon Kujira and keyboardist of Grojband. Kin is a brilliant but completely loony inventor who is in charge of the band's pyrotechnics, lighting, computers, and any other technology or gadgetry (often his creations) that could come in handy when trying to make Trina go into Diary Mode or preparing for Grojband's latest musical gig - even if his gizmos cause as many problems as they solve.

"Dogs don't have fingers, I must be a drummer! DRUM SOLO!!!"
Voiced by: Tim Beresford

The twin brother of Kin Kujira and drummer of Grojband. While nowhere near as intelligent as Kin (although he often shows signs of being smart in his own highly unusual way), Kon is a big, jovial, fun-loving, and energetic goofball as every bit as wacky as his diminutive brother (in fact, he might possibly be even crazier). He also seems to have an unrequited crush on Trina Riffin, to her disgust.

"Just try to imagine... just imagine... how little I care, and junk."
Voiced by: Alyson Court

The show's main antagonist and Corey's 16-year-old sister. Trina is a violent, hateful, temperamental, narcissistic, self-centered, unstable, and just plain psychotic girl with two goals in life that she'll stop at nothing to make a reality at the expense of everyone else's well-being: crush her hated brother and his bandmates' dreams of achieving musical stardom, and make local heartthrob Nick Mallory love her.

Once per Episode, she is overcome with an emotion (anger, sadness, or happiness) and enters "Diary Mode", writing about an episode's events in her diary and inadvertently giving Grojband the inspiration they need for their song's lyrics.

Trina's spineless 14-year-old best friend and personal toady/slave, as well as her polar opposite. Mina is a timid and good-natured girl who eagerly carries out all the painful and unpleasant parts of Trina's Grojband-crushing and Nick Mallory-romancing plans. Despite being constantly abused and mistreated by Trina, Mina is unfailingly loyal to her and genuinely considers Trina her BFF. 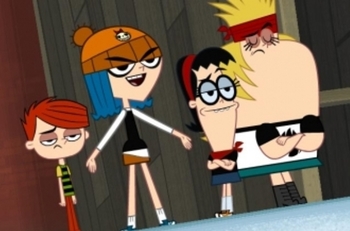 The show's secondary antagonists. The Newmans are a rival garage band made up of Distaff Counterparts to Corey, Laney, Kin, and Kon. They always compete against Grojband in music contests or for the various gigs they pursue.

"Well, whatever the worst burn of your life was, imagine it just got said to you. Twice!"

The lead guitarist/lead singer of the Newmans and Mina Beff's younger sister. She's more competent in writing lyrics than her male counterpart Corey, but shares his confident attitude and love of grabbing every musical gig possible.

"Gals, I am not built for this. And I didn't bring my inhaler."

The bassist, manager, and only male member of the Newmans (although he's often mistaken for a girl). In contrast to his tomboyish female counterpart Laney, he is shy, anxious, soft-spoken, and cowardly. He has a huge crush on Carrie.

"I think they're taking this whole sharing a heart thing too far."
—Kim
"Ice cream! ICE! CREAM!"
—Konnie (With Kon at the same time)

Twin sisters who respectively serve as keyboardist and drummer for the Newmans. Like their male counterparts in Grojband, Kin and Kon, Kim is the brains of the team's musical gigs while Konnie is the goofy but lovable brawn. 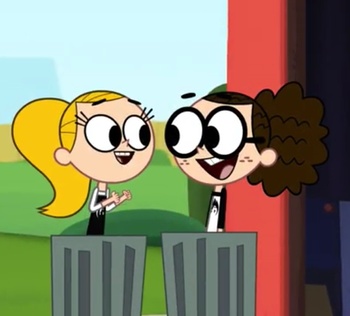 Allie is on the blonde one on the left, while Kate is the one on the right with the glasses
"Grojband! EEEEEEEE!"
Voiced By: Addison Holley (Kate Persky) and Madelyn May (Allie Day)

Two 9-year-old girls that Grojband refer to as their "groupies". They are the band's biggest (and possibly, only) fans and eagerly help them out with any of their plans whenever the group turns to them for assistance. 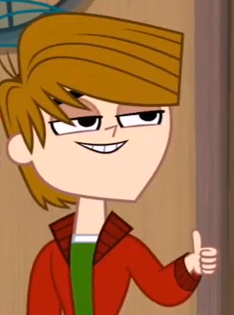 "Nick Mallory says the secret to a cool lean is not needing anything to lean on."
Voiced by: Graeme Cornies

An extremely cool and hunky teenage dreamboat. Nick Mallory is the subject of Trina's massive crush, and most of her life is based around pursuing him to gain his affections - which Grojband always uses to their advantage. 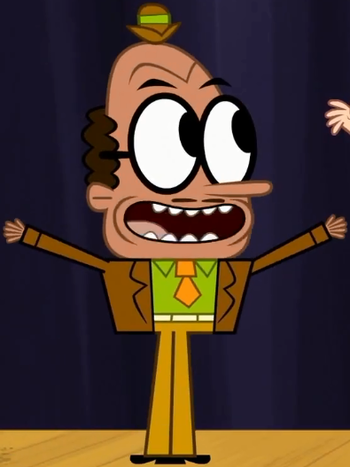 "Quarantine is such a hard word to spell, but yes, for nine days!"
Voiced by: Kedar Brown

The mayor of Peaceville. He seeks keep his town peaceful no matter what it takes, which means opposing Grojband's crazy plans. He's always carries with him a picture of his late mother that he talks to.

"Corey. Being country means you want stand for what's important 'cause you lost it. You lost an entire country! And that's country!"
Voiced by: Robert Tinkler

A billionaire who owns and manages many businesses across Peaceville. In every episode he appears, he wears a different hat (at times with a uniform) that represents the job he currently has. 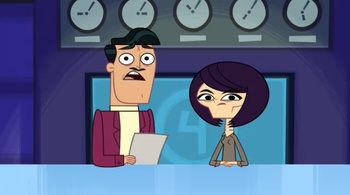 Buzz Newsworthy is on the left and Chance Happening is on the right
Buzz: "Breaking news from the Carbonation Festival, where Mayor Mellow has taken a bottlecap to the brain!"
Chance: "Did his head completely explode? Will your soda explode your head?! Is your head exploded right now?!! Tune in at 6 for more."
Voiced by: Dwayne Hill (Buzz Newsworthy) and Julie Lemieux (Chance Happening)

Peaceville's local reporters and the anchors of the Channel 4 news program. Always quick on the scene to cover events, they have a tendency to exaggerate their stories and often feud with each other.