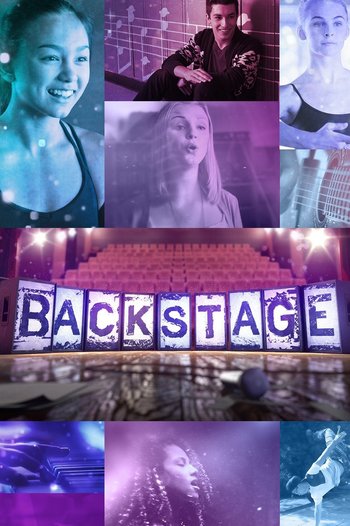 Backstage is a Canadian drama series created by Fresh TV, aka the same company behind such animated series as 6teen, the Total Drama franchise, Stōked, and Grojband.

The series is set at a performing arts high school known as Keaton School of the Arts, which teaches such classes as dancing, singing, music, and the visual arts. It focuses on the trials and tribulations of the various students attending the school, as well as their teachers. Rather than a singular protagonist however, the series uses the Ensemble Cast approach, with the spotlight being given to some of the many dancers, singers, musicians, and artists (all played by people genuinely trained in the performing arts) at the school.

Debuting in 2016, Backstage' aired on Family Channel in its home country and on Disney Channel in the U.S. It ran for two seasons and a total of 60 episodes, with the the second season making its debut on Netflix in early 2017.